A Serious Neck Problem That Is Usually Misdiagnosed

During my thirty years in practice, I noticed a small group of patients complaining of severe neck pain and head symptoms that had some startling similarities.

Their maladies didn’t fit into the typical diagnoses we’d learned in medical and chiropractic schools, since their complaints involved several organ systems and didn't match the findings on their MRIs.

Here were a few of their "typical" symptoms:

Even more intriguing, their condition often started after a severe neck trauma, but not always.

Usually they first sought treatment from their primary doctors, and later progressed to a neurologist, physical therapist, chiropractor and two or three more specialists. In fact, several visitied the emergency room, multiple times, when their symptoms were especially severe.

They were given MRIs and CT scans and received many varying diagnoses, including cervical disc herniations, migraine syndromes and anxiety disorder. In actuality, I don't think their doctors really knew what they were treating, so they tried to just minimize the symptoms with medications.

Stilll the patients continued a downward spiral, their lives becoming filled with pain, fear and depression. Working, taking care of their kids and even shopping (florescent lights and loud noises often were untolerable) came to a near stop. 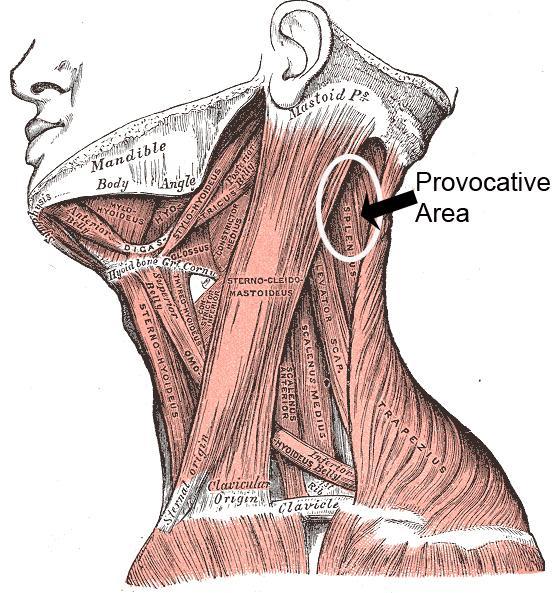 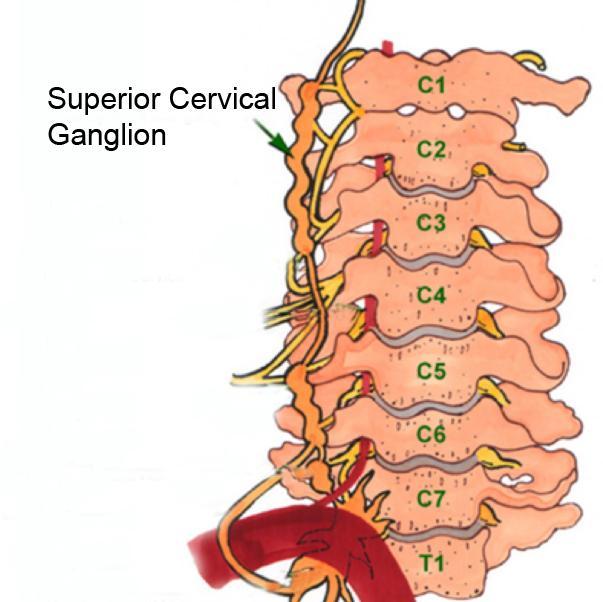 What Findings Did These Patients All Have In Common?

The examination revealed a commonality that had to be noted. All of these patients had an exquisitely tender spot, about the size of a nickel, in their upper neck, just below the base of their skull and about 1-2 inches away from the midline.

Just lightly touching this area made the patient’s recoil in pain. Often their other symptoms were recreated as well. Their disorientation might reappear, their eyelid droop, pain may shoot across their face or their head would become incredibly hot.

One of the body parts just below this tender point, is the Superior Cervical Ganglion. It’s a large group of nerve cells that directly affect the face, eye, ear, and blood vessels throughout the head.

What if this group of nerves was being compressed by the surrounding muscles or adjacent spinal segment? Would that create this set of symptoms?

Would it explain the odd and divergent set of complaints and the reason why applying pressure to that area was so provocative? It might also justify the normal brain MRIs, since MRIs don’t usually thoroughly visualize or comment on the Superior Cervical Ganglion.

Many of these patients had severe neck problems, including disc herniations and even spinal cord compression--but not all. Their neck movements were usually limited and usually recreated their symptoms. This would make sense, since the pathology in their necks probably led to the compression of this ganglion.

What Treatment Seems To Really Work?

So our treatment focused on restoring the function of the neck and releasing the restricted and thickened tissue surrounding the Superior Cervical Ganglion. To do this, we had to restore correct movement, alignment and function to the upper neck without irritating this nerve center.

It was not easy, but we became quite good at it. The patients usually had noticeable improvement within a few weeks, although complete remission took a few months.

Our success rate was extremely high (well over 85%) and without one patient ever being injured. They reduced or eliminated their medications, their heads cleared, ears opened and their lives returned to normal. Of course, your symptoms could be caused by many other problems in your cervical spine.

Click here to read about other problems and their solutions that can come from your neck.

I have to wonder how many people are walking around today with these miserable symptoms and limitations on their lives that coul be helped.

A larger study of this condition is warranted. I'm hoping to publish a study regarding this condition in the future. Presently, I lecture on this subject to doctors and other health care professionals.